The extracts below from the 3rd edition of de Saussure, Ferdinand (1915) Course in General Linguistics.


Some people regard language, when reduced to its elements, as a naming-process only — a list of words, each corresponding to the thing that it names. For example: 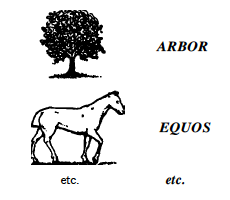 This conception is open to criticism at several points.

But this rather naive approach can bring us near the truth by showing us that the linguistic unit is a double entity, one formed by the associating of two terms.

The linguistic sign unites, not a thing and a name, but a concept and a sound-image. The latter is not the material sound, a purely physical thing, but the psychological imprint of the sound, the impression that it makes on our senses. The sound-image is sensory, and if I happen to call it "material," it is only in that sense, and by way of opposing it to the other term of the association, the concept, which is generally more abstract. …

The linguistic sign is then a two-sided psychological entity that can be represented by the drawing:


Our definition of the linguistic sign poses an important question of terminology. I call the combination of a concept and a sound-image a sign, but in current usage the term generally designates only a sound-image, a word, for example (arbor, etc.). One tends to forget that arbor is called a sign only because it carries the concept "tree," with the result that the idea of the sensory part implies the idea of the whole.

Ambiguity would disappear if the three notions involved here were designated by three names, each suggesting and opposing the others. I propose to retain the word sign [signe] to designate the whole and to replace concept and sound-image respectively by signified [signifié] and signifier [signifiant]; the last two terms have the advantage of indicating the opposition that separates them from each other and from the whole of which they are parts.


Now the real interpretation of the diagram of the signal becomes apparent. Thus

means that in French the concept "to judge" is linked to the sound-image juger; in short, it symbolises signification.