How To Identify Topical Theme

In a free major clause, topical Theme is the first experiential element of a clause, whether participant, circumstance or process.

Any textual or interpersonal elements that precede the topical Theme are also thematic.

If a clause has a marked topical Theme, such as a circumstance, then it has no unmarked Theme.

The inertia of the human mind and its resistance to innovation are most clearly demonstrated not, as one might expect, by the ignorant mass — which is easily swayed once its imagination is caught — but by professionals with a vested interest in tradition and in the monopoly of learning.  Innovation is a twofold threat to academic mediocrities: it endangers their oracular authority, and it evokes the deeper fear that their whole, laboriously constructed intellectual edifice might collapse.  The academic backwoodsmen have been the curse of genius from Aristarchus to Darwin and Freud; they stretch, a solid and hostile phalanx of pedantic mediocrities, across the centuries.

Email ThisBlogThis!Share to TwitterShare to FacebookShare to Pinterest
Labels: Clarification

SFL Is A Dimensional — Not Modular — Theory

In SFL language is described, or “modelled”, in terms of several dimensions, or parameters, which taken together define the “architecture” of language. These are

The mistaken notion that SFL is a theory of "interacting modules" can be sourced to Martin (1992).

Each of the presentations of linguistic text forming resources considered above adopted a modular perspective. As far as English Text is concerned this has two main dimensions: stratification and, within strata, metafunction.

Within discourse semantics, the ways in which systems co-operate in the process of making text is much less well understood. … A more explicit account of this co-operation is clearly an urgent research goal; English Text has been concerned not so much with addressing this goal as with making it addressable by proposing four relatively independent discourse modules to beg the question [sic] … . The point is that integrating meanings deriving from different metafunctions is not a task that can be left to lexicogrammar alone.

The modularity imposed by stratification is also an important issue. Discourse systems generate structures which in principle cut across grammatical and phonological ones.

In this chapter a brief sketch of some of the ways in which discourse semantics interacts with lexicogrammar and phonology has been presented. The problem addressed is a fundamental concern of modular models of semiosis — namely, once modules are distinguished, how do they interface? What is the nature of the conversation among components?

Grammatical metaphor then is the meta-process behind a text. It co-ordinates the synoptic systems and dynamic processes that give rise to text. It is the technology that let's [sic] the modules harmonise. It is their medium, their catalyst, the groove of their symbiosis, their facilitator, their mediator. It is the re/source of texture.

At the deepest level time-phase and reality-phase are the same thing: both are concerned with the stages of becoming. A process is something that emerges out of imagination into reality, like the rising of the sun. Before dawn, the sun shines only in the future, or only in the imagination – as future turns into present, imagination turns into reality.

A clause with no feature of ‘agency’ is neither active nor passive but middle. One with agency is non-middle, or effective, in agency. An effective clause is then either operative or receptive in voice. In an operative clause, the Subject is the Agent and the Process is realised by an active verbal group; in a receptive [clause] the Subject is Medium and the Process is realised by a passive verbal group. 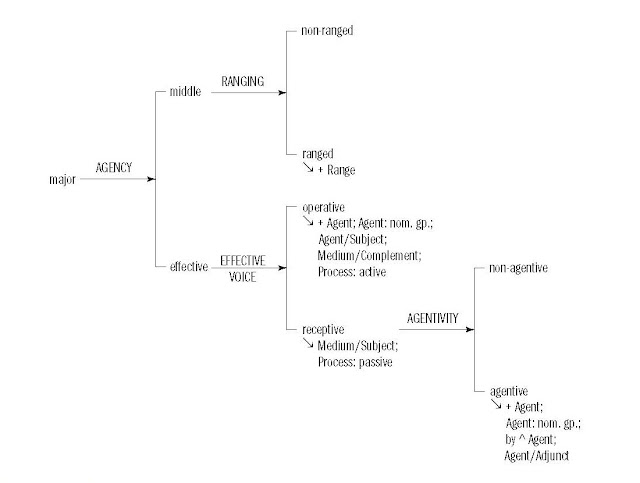 The Difference Between Delicacy And Instantiation

Delicacy is a 'type to sub-type' relation (hyponymy).  In terms of logical semantic relations, this is elaboration.  For example, delicacy is the relation between 'academic' and 'lecturer'; 'lecturer' is a sub-type of the more general type 'academic'.

In terms of the theoretical architecture of SFL theory, delicacy is a dimension of the system, whereas the dimension of instantiation relates two perspectives on language: the system to an instance of the system.
Posted by Dr CLÉiRIGh at 00:00:00 No comments:

The distinction between hypotactic and embedded expansions is set out in Halliday & Matthiessen (2004: 442) in Table 7(15).

What Is The Advantage Of Distinguishing Between Embedding And Hypotaxis?

In the case of projection, it lays the foundation for the semantic distinction between (pre-projected) facts and (projected) reports (Halliday & Matthiessen 1999: 28).
Posted by Dr CLÉiRIGh at 15:15:00 No comments:

Why Projected Clauses Are Not Clause Constituents

In our analysis (unlike that of the mainstream grammatical tradition), the projected clause is not a constituent part of the mental or verbal clause by which it is projected. There are numerous reasons for this; some of them are grammatical — for example, it cannot be the focus of theme–predication … it cannot be the Subject of a passive mental clause … it is presumed by the substitute so, which is also used to presume conditional clauses in clause complexes … But these, in turn, reflect the semantic nature of projection: this is a relationship between two figures, not a device whereby one becomes a participant inside another.

For The People's Front Of SFL, La Lucha Sigue

Email ThisBlogThis!Share to TwitterShare to FacebookShare to Pinterest
Labels: Satire

The Dreams That Stuff Is Made Of: grammar, metaphor, and imagination in the ‘Thought Experiments’ of physics and poetry 1890-1960

Term in the experiential clause system contrasting with ‘ascriptive’. In the identifying mode, one entity is used to identify another. Identifying clauses are realised by the presence of the Token and Value and/or the Identifier and Identified in the transitivity structure of clause. Combinations of these two sets of variables determine coding direction between decoding and encoding, for example, if the Token is construed as Identified and the Value as Identifier the clause is an encoding one, as in the Mint Museum houses a collection of Australian decorative arts. Identifying relations manifest in the environment of ‘intensive’, for example, the new president is Obama, ‘possessive’, for example, (see above), and ‘circumstantial’ relational processes, for example, many mansions line the harbour.

But there are processes of sensing that can project.  These include processes like 'seeing', 'hearing', 'thinking' and 'feeling':

The only processes of sensing that can project other figures are those of thinking (cognition) and desiring (desideration).  Here Martin & Rose misconstrue desiring as feeling (emotion), and falsely claim that processes of perceiving (perception) can project.  The 'perceiving' examples do involve projections (metaphenomena), but these are not projected into semiotic existence by the perceiving process.

Sensing projects ideas into existence; the projection may take place either through cognition or through desideration, for example:

Thus the idea ‘I’ll give it up’ is created by the process of thinking; it does not exist prior to the beginning of that process.  Similarly, the idea ‘me to crawl on my bended knees’ is brought into hypothetical existence by the process of wanting.  In contrast, perceptive and emotive types of sensing cannot project ideas into existence.  That is, ideas do not arise as a result as a result of someone seeing, hearing, rejoicing, worrying, grieving or the like.  However, these two types of sensing may accommodate pre-existing projections, i.e. facts, for instance:


It assures me [[that I am as I think myself to be, that I am fixed, concrete]].
I was impressed, more or less at that point, by an intuition [[that he possessed a measure of sincerity the like of which I had never encountered]].
We heard [[that you kindly let rooms for gentlemen]].

Thus ‘that I am fixed, concrete’ is construed as something already projected (hence we could add assures me of the fact that) and this fact brings about the emotion of assurance.

Postscript: It has since been found that there are so many egregious errors in Working With Discourse that a blog has been established — see here — in order to undo as much of the damage as possible.